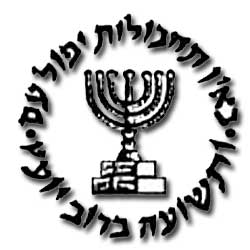 Mossad is short for Ha-Mōśād le-Mōdī`īn ū-le-Tafqīdīm Meyūhadīm and its English translation is The Institute for Intelligence and Special Operations. Although Mossad is the most famous of the Israeli intelligence agency, its functions and operations are limited compared to AMAN.

Mossad is concerned with overseas espionage activities related to the security of Israel. Functionally, Mossad is similar to the British intelligence agency MI6 or the American CIA. Its primary objectives are to collect and analyze all intelligence information related to Israels security, perform covert operations, conduct counter intelligence and counter terrorism activities. It is also responsible for covert paramilitary operations.

It also deals with nations that have no diplomatic relations with Israel. Metsada is a Special Operations Division which is responsible for sabotage, paramilitary operations and assassination. The research department synthesizes intelligence. Lohamah Psichlogit (LAP) is responsible for propaganda and psychological warfare. Technological requirements of the agency are fulfilled by the technical department.

The exact number of staff at Mossad is not known. A report published by CIA in 1973 puts the number of officers working for the agency at 500, with another 1000 to 1500 hundred support staff. Mossad is primarily a civilian organization and its officers do not get military ranks. However, most members of the agency are ex Israel Defense Forces. Mossad is directly under the control of Israeli Prime Minister.

Mossad history starts almost immediately after the inception of the State of Israel.

In 1949 Central Institute for Coordination was set up to improve coordination between the Shabak, AMAN and political department of the Foreign Office. It was under the control of Foreign Ministry.

In 1951, CIC was replaced by Mossad under direct supervision of the Prime Minister. In June 1951 Mossad signed a clandestine agreement with the American CIA.

The first high profile operation of Mossad came in 1960 when it managed to kidnap Adolf Eichmann, a Nazi war criminal, from Argentina. Eichmann was sentenced to death for his role in killing Jews in Europe.

During the 60s Mossad provided critical information about Egyptian air force during the 6 day war. It helped an Iraqi defector Munir Redfa and his family escape Iraq.

Mossad was responsible for assassinating members of a group, who killed Israeli athletes in 1972 during the Munich Olympics.

Mossad Logo In 1973 it killed an innocent Moroccan waiter Ahmed Bouchiki in Norway. The agency confused him as the leader of a Palestinian group Black September, which was responsible for the Munich massacre.

This was later known as the Lillehammer affair. The incident caused a diplomatic row with the Canadian government, as the six Mossad agents involved in the murder had used Canadian passports.

In 1975, Mossad arranged a secret meeting between the Israeli and Jordanian heads of state. It also arranged a second meeting in 1977. Mossad agents were sent to Uganda, to free 100 hostages held in a plane from Tel Aviv. The agency assisted in Operation Moses in late 70s. This operation was used to immigrate Jews from Ethiopia.

In 1980 Mossad agents killed Yahya al-Mashad, an Egyptian nuclear physicist. The agency provided vital information to the government about the Iraqi nuclear assets. This information was used in the air attacks on Iraq's Osirak nuclear reactor in 1981. In the same year, the agencys attempt to use British passports to infiltrate china created uproar in Britain.

The agency provided intelligence during the Israeli invasion of Lebanon in 1982. Mossad organized an attack on PLO headquarters in Tunisia that killed 56 Palestinian citizens. Mordechai Vanunu was kidnapped from Rome by the agency in September 1986. He was an Israeli citizen who informed western media about Israels covert nuclear program.

The agency failed to assassinate Saddam Hussein in 1991. It suffered several failures in 1997. Most notably the assassination attempt on Hamas leader, Sheikh Khaled Mashal. Israel had to release 70 Palestinian prisoners in order to save the life of Mossad agents involved in the affair.

In 2001, the agency warned CIA of Al-Qaedas plans but they not taken seriously. Two Mossad agents Eli Caram and Uriel Kelman tried to obtain New Zealand passports illegally in 2004. The New Zealand authorities apprehended the men, sentenced them to six months in prison and imposed diplomatic sanctions on Israel. The Israeli foreign Minister later apologized for the incident.

Mossad has a diverse range of operational activity and Mossad operations methods for defending Israeli and Jewish interest are extremely crude.

The agency has been known to kidnap torture and kill individuals, manipulate journalists and politicians and monitor various organizations and individuals.

Mossad is one of the most effective intelligence organizations in the world. It has operatives in many important countries, especially Middle East.

The largest number of Mossad agents work in the United States where they collaborate with American intelligence agencies and are known to affect American Middle East policy.

The Deputy Secretary of Defense, Paul Wolfowitz is suspected of working closely with Mossad.


Mossad has never been hesitant to work with hated regimes for the benefit of Israel:

MORE ON THE HISTORY OF MOSSAD

The 29 November 1947 United Nations Partition Plan plunged the Land of Israel (Eretz Yisrael) into into a maelstrom of war. The first wave of attacks came from local Arabs. When the British Mandate officially ended and the State of Israel was declared on 15 may 1948, the local Arabs were joined by Arab states, which sent their armies to invade Israel from the south, the north and the east.

Before the State was declared, there were several underground and semi- underground organizations in the Jewish Community (Yishuv) which, naturally, required information for their operation. These included rescuing Jews, "illegal" immigration, deterring Arab mobs, and anti-Mandate operations. The Hagana, the Yishuv's main military force, established Shai  Sherut Yediot, or Information Service. Shai's job was to collect information for Hagana operations and to provide information to the Yishuv leadership for its political and military dealing with the Israeli Arabs, the Arab countries, and the mandate authorities. Shai became well established before the state was declared and its chiefs included Isser Harel (Halperin, or "little Isser"), who later headed both the Security Service (Shin-Bet) and Mossad. Other organizations had their own intelligence services to serve their individual needs.

The declaration of the State and the onslaught of the Arab armies dictated new needs: the need to create an intelligence infrastructure, the need to establish an official framework, and the need to define specific spheres of responsibility. These needs were both clear and urgent.

A military information service is to be established by the Staff (the General Staff), headed by Isser (Beeri) and Vivian (Haim Hertzog). Shai will be responsible for safety (Security), censorship and counterintelligence.

An internal information service under (little) Isser and Yosef Y. [Yosef Yizraeli, a Hagana national staff member who, in 1948, was appointed the Defence Ministry's general secretary].

An external political information service  to be headed by Reuven Shiloah. Until the end of the war it will be subordinate to the Defense Ministry and later, possibly, to the Foreign Ministry.

The decision was the start of a long process. In keeping with Ben Gurion's decision, Reuven Shiloah was appointed head of the Foreign Ministry's political department, which was to provide an external political information service. He also became the Foreign Minister's adviser for special tasks.

Reuven Shiloah concentrated mainly on foreign political matters, such as efforts to form alliances with non-Arab Islamic states, e.g. Turkey, and salvaging Jewish assets abroad and bringing them to Israel.

A small Shai station, headed by Haim Ben Menahem, started operating abroad in the summer of 1947. In June 1948, when the political department was established, Arthur Ben Natan was sent to Paris to take over Ben Menahem's contacts. This operational department, which was by now taking shape, was called Da'at (knowledge).

Things were still not clear-cut. Ben Gurion objected in principle to public acknowledgement of the existence of a security and intelligence service. Thus the political department, defined as an 'external political information service', indeed became an independent, covert intelligence agency, but it was still lodged in the Foreign Ministry. This meant that the service's objectives, tasks, powers, budgets, and inter-service relations could not be legislated. Inter-service delineation was often blurred and forays into each other's territory were not uncommon.

In April 1949, the supreme inter-ordination committee was formed and headed by Reuven Shiloah. Its members, who later became known as VARASH or the Service Chief's Committee, included the Shin-Bet, which emerged from Shai, the political department, the military intelligence department and the Israeli Police.

In July 1949, Reuven Shiloah, a close associate of David Ben Gurion, proposed establishing a central institution for organizing and co-ordinating intelligence and security service. The object was to enhance inter-service co-ordination and co-operation. On 13 December 1949, Ben Gurion authorized the establishment of the 'Institution for Co-ordination' to oversee the political department and to co-ordinate the internal security and military intelligence organizations. The institution, or Mossad, was born on that day.

The Mossad started out under Foreign Ministry auspices. In March 1951, with a view to enhancing its operational capabilities and to unifying all overseas intelligence gathering, Ben Gurion authorized its final reorganization. An independent, centralized authority was set up to handle all overseas intelligence tasks. This was called the 'Authority' and formed the major part of the Mossad. It included representatives of the other two services at HQ and field echelons. The Mossad broke free of the Foreign Ministry and reported directly to the Prime Minister, thus becoming part of the Prime Minister's Office.

The Mossad eventually adopted the following verse from the Book of Proverbs as its motto, guide, creative awakener and ideology, but also was as a dire warning:

"WITHOUT GUIDANCE DO A PEOPLE FALL, AND DELIVERANCE IS IN A MULTITUDE OF COUNSELLORS."
Proverbs XI/14

To: The Foreign Ministry

From: The Prime Minister

I have charged Reuben Shiloah, Foreign Ministry adviser for special projects, to organize and head the institute. Reuben Shiloah will report to me.

He will act upon my instructions and will submit regular working reports to me.

For administrative purposes, his office will be part of the foreign ministry.

I have instructed R. Shiloah to submit a manpower and budget proposal for 1950-51 for approximately IL20,000, IL5,000 of which will be used for special operations, contingent on my prior authorization.

You are hereby requested to add this sum to the foreign ministry budget for 1950-51.